Home » About
Father’s House Educational Foundation was founded in August 2008 by Byron and Tammy Stinson. Their story appears below. Byron, Tammy, and their companies generously provided all of the ministry’s operating expenses until May 2017. At that time, the Stinsons transferred the entire ministry to the leadership of John Turner who had served alongside them from the beginning. John immediately transitioned Father’s House to become a faith ministry supported completely by volunteer givers who believe in the foundation’s vision and mission. Father’s House Educational Foundation is a grace-based ministry that exists to bless God’s people (Jewish and Gentile) and increase their joy in the Father by creating experiences that: Upon assuming leadership of the Father’s House John and his wife Roxie began to pray for the Father to raise up like minded servants to help lead the ministry. By October 2017 the new Father’s House Board of Directors conducted their first formal meeting.

Leadership and Board Members 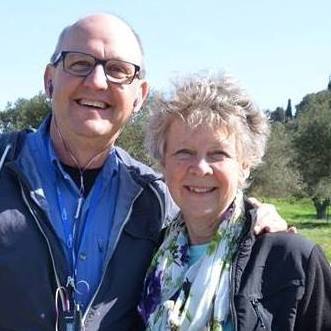 Dr. John W. Turner, Jr. serves as the Executive Director of Father’s House Educational Foundation.  He and Roxie married in August of 1975.  They are blessed with five children and fifteen grandchildren (so far). Dr. Turner has continuously served as a pastor of churches in California and Texas since 1981.  Today, he serves as pastor of New Prospect Baptist Church in Nemo, Texas.  Each week he also serves as the Ministry Advisor of the National Association of University-Model® Schools (www.umsi.org).  He is author of the definitive book, Character-Driven College Preparation: The Mission and Method of the University-Model® School.  He often speaks to parent, church, and school groups. Out of his many journeys to Israel since 2008, Dr. Turner has developed a series of “Living Lessons from the Land.” These can be stand alone messages or taught in series, according to the occasion in your congregation or community.  He will come to wherever you are on a cost reimbursement basis.  Any voluntary love offerings or honoraria from these teachings are donated to the Father’s House General Fund for the support of the foundation’s work.  To schedule Dr. Turner, write him at jturner@fathershousefoundation.com. 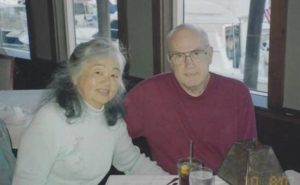 Doug served 32 years as general manager of a regional flood control and water conservation agency in California.  He held various leadership positions in related state and national organizations. He also served in various teaching and leadership positions, including deacon and elder in the local church.  At the state and national levels Doug served on the Executive Board of the California Southern Baptist Convention and on various committees of the National Convention. Toby worked hard as an elementary school teacher for 35 years and as a Master Teacher for the last 15 years of her career. Toby is a skilled sign language interpreter and served in both Billy Graham and Luis Palau Crusades. She has served in multiple positions in the local church including children and youth ministry, women’s and hospitality ministries and ministries for the deaf. Doug and Toby have made 2 trips to Israel with Father’s House and have sponsored and coordinated 2 other trips. Doug and Toby have been married 56 years, have 2 sons (both pastors), and 6 grandchildren. 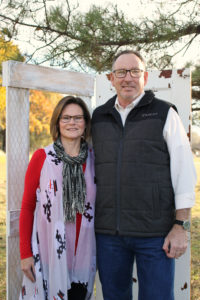 Ward and Vivian both  grew up in Cedar Hill, Texas and currently live in Alvarado. They have two children Robin Ludwig and Warren Hudson along with five grandsons. Ward and Vivian are active in StoneWater Church Glen Rose, Texas. Ward has been in pastoral ministry for the past 27 years. He currently works in pastoral care with StoneWater. Vivian is a kindergarten teacher at Gerard Elementary in Cleburne, TX and Ward recently retired from public education serving as an administrator and high school counselor. Ward received his BS in Vocational Education from Wayland Baptist University in 1989, his Masters of Divinity from Southwestern Baptist Theological Seminary in 1997 and a Masters of Education and Counseling in 2006 from Tarleton State University. Ward and Vivian look forward to serving Christ through Father’s House Foundation and are excited about the doors of opportunity that will be opened through this ministry in the days ahead. 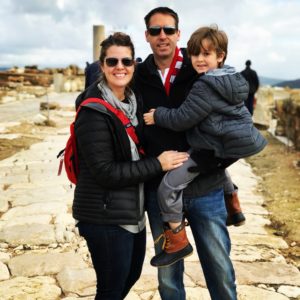 Justin and Sharla Robertson have one son and live in Granbury, TX.  Justin owns two custom leather companies.  J T Custom Leather is his original business he started in 2008 and then in 2016, after he & Sharla’s first trip to Israel with The Father’s House, he felt God leading him to begin another type of leather business.  Justin was immediately drawn to the Judean wilderness because it looks a whole lot like West Texas, where he & Sharla were both raised.  During that first trip, he learned that the Hebrew word for wilderness is “Midbar.”  This wilderness is not what we normally think of as a desert because God never deserts us.  He always provides, just as He did for the Israelites as they wandered for 40 years.  Midbar Leather was born and Deuteronomy 29:5 is the scripture you’ll find branded on each of the handcrafted leather items Justin makes.  “Yet the LORD says, “During the 40 years that I led you through the wilderness (midbar), your clothes did not wear out nor did the sandals on your feet.””  This is the inspiration behind making timeless, classic leather goods that last.  On the Midbar logo you’ll notice something that looks like mountains, but it’s not mountains. This is actually the ancient Hebrew symbol for the letter “m” and contains a multi-faceted meaning of both the number 40 and the representation of “Living Water.”  Justin’s 40th year of life is when he first set his feet in the Holy Land. This work, these names and symbols and the scripture you see in each product he makes is full of meaning and purpose.  Justin and Sharla loved Israel so much they returned again with their son.  Sharla went one other time on the Father’s House Women’s Journey.  Sharla is a Chiropractor by profession.  She also leads a women’s prayer and worship gathering called “Women At the River,” where the heart is to gather women and girls of all ages to draw near to God in Spirit and in Truth.  Multiple journeys to Israel have shaped and strengthened and solidified this family’s faith in immeasurable ways. 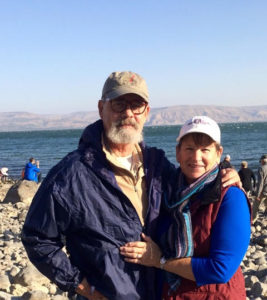 The year 2013 was a significant year for the Stafford family. After many years of anticipation and searching, Kathy and I decided to retire from our businesses and relocate in Nemo, Texas. Kathy owned and managed a horse training facility, and I owned a farrier business. The move was somewhat of a surprise. Other locations would have been closer to our California friends. Other considered locations would have had far more desirable weather patterns than Texas, but over time we were led to the perfect home for us. Once here we set out to rebuild our life. We needed a church home. Again through a series of unexpected developments the Lord confirmed his direction for us. New Prospect Baptist, with John Turner, became our new church home. Our friendship with Dr. Turner and his lovely wife Roxie led us to Fathers House and a life altering experience on a trip to Israel in 2016. Kathy and I know that we have been led here for a reason. I don’t think we even question these moves any more; we just know to go where we have been directed by our Lord. To know that you are doing the right thing in the right place with the right people is a wonderful thing. We believe in Fathers House and its mission of education and ministry. We believe in John and Roxie Turner and their ability to teach and guide our faith. We believe in our Lord Jesus. Romans 12:2 …Instead, keep letting yourselves be transformed by the renewing of your minds; so that you will know what God wants and will agree that what he wants is good, satisfying and able to succeed.

Tim Whitlock is a life-time resident of Cleburne, Texas.  The Lord has blessed Tim with his wife Elizabeth, their three daughters, and five wonderful grandchildren.  He is a member of Cleburne Bible Church which is a huge blessing for him and his family. He is very active in the community.  He currently serves on boards for The Father’s House Educational Foundation, United Way of Johnson County, Spark Worldwide, Teen Life Challenge of Johnson County, and Pinnacle Bank Texas.  He also enjoys assisting various organizations with fund-raising efforts.  Tim holds a BBA in Finance from Texas Wesleyan University.  He has been in the banking industry for 26 years and is a Regional President of Pinnacle Bank Texas.  He enjoys travel, fishing, golf, and most outdoor activities.  He is very thankful for The Father’s House Foundation and looks forward to what the Lord will continue to accomplish through it for His Kingdom. Jeremiah 29:11 “For I know the plans I have for you,” declares the Lord, “plans to prosper you and not to harm you, plans to give you hope and a future.”

Byron and Tammy are dedicated Christians serving the Lord and standing with congregations and pastors in many lands. The list of churches the Stinsons support and call home is long, being originally concentrated in Somervell and Johnson counties in Texas. Today this network extends to many other cities across the U.S. and around the world. Primary churches the Stinsons consider “home” include Stonewater Church in Granbury, Texas; The Church in Peaster, Texas; Bono Baptist Church in Godley, Texas; Red Cross Church in Avoka, Ireland; King of Kings Congregation in Jerusalem; and Releasor of Life Fellowship in Davao City, Philippines. The Stinsons currently own or have owned and operated several companies in diversified fields. The largest corporation they own and manage is Glen Rose Transportation Management, Inc., (GRTM). a non-asset transportation brokerage company. For more information on non-asset transportation, and specifically GRTM, check out the company web site at http://www.grtminc.com.  In addition, you are invited to check out http://www.nationalfleettracking.com. The Stinsons believe they are blessed by God to be a blessing to others.  Byron and Tammy’s journey together in serving the Lord continues to lead them into many adventures.
Start typing to see products you are looking for.