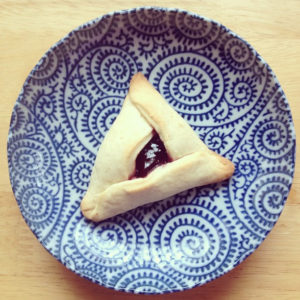 Starting at sundown on March 11 and continuing until sundown on March 12, Jewish families all over the world will observe the Feast of Purim with pastries known as Hamantaschen, children dressing up as their favorite Biblical heroes, and the reading of the
Megillat Esther – the book of Esther.

The Feast of Purim is a holiday that declares the faithfulness of God to His covenant
people, Israel, and affirms that He is the only god that man can trust as a god that keeps his
word and cares for his children wherever they are.
Purim (which means “lots”) carries multiple ironic hidden messages because Haman, the
story’s villain and enemy of the Jews, plotted to eradicate them by casting lots. Esther –
Hadassah as she was named at birth – remained hidden in King Xerxes’ palace as a Jewish
woman. Her Persian name Esther, most likely given to her upon entering the Persian king’s
court, comes from a root word meaning “hidden.” Hidden from all for a good reason…the
time for revelation had not yet come.

Esther’s story begins with King Xerxes’ banishment of the former queen and his search for a
new queen (Esther 1:10 – 2:4). At the proclamation of the king’s decree, Esther’s uncle,
Mordekhai – who had raised her as his own after her parents’ death – saw to it that she
responded to the decree and was then taken into the king’s house and put under the care
of a palace servant. Esther won favor with the palace servant. He lost no time giving her
cosmetics, special food, and seven girls from the king’s palace to attend to her (Esther 2:8 –
9). Esther 2:10 tells us Mordekhai instructed her not to tell of her people, or her family ties
– basically her Jewishness.

After the 12 month requirement of beauty treatments, each girl had her turn to appear
before the king in an effort to win his favor and ultimately, to become his choice for queen.
Each girl was given whatever items she wanted from the harem’s house to increase her
chances for favor with the king. At Esther’s turn, she asked for no additional items, yet she
was admired by all who saw her on her way to appear before the king. Esther 2:17 reveals
none of the other girls obtained such favor and approval from him. Esther had won the
heart of the king! Surely God had His hand upon Esther and caused the king to smile on
her. Surely “the king’s heart in Adonai’s hand is like streams of water – He directs it
wherever He pleases” Proverbs 21:1.

After Esther is made queen, Mordekhai becomes aware that Haman (may his name be
blotted out forever) has devised a plan to exterminate all of the Jewish people living in King
Xerxes’ provinces. Mordekhai is able to reveal this news to Queen Esther. It is this famous
exchange between Mordekhai and Esther where we get the well-known and powerful
scripture: “Don’t suppose that merely because you happen to be in the royal palace

you will escape any more than the other Jews. For if you fail to speak up now, relief
and deliverance will come to the Jews from a different place; but you and your
father’s family will perish. Who knows whether you didn’t come into your royal
position for such a time as this” (Esther 4:13 – 14). Mordekhai knew the God of Israel is
a covenant keeping God. So much so that he could say in earnest that God would deliver
His people. But if Esther did not use her position as the queen, she would not be one who
received that deliverance. Wow.

We know the end of the story. Amazingly, when Esther approaches the king – which would
result in death if he did not let down his scepter – she receives the necessary sign of
approval to speak. She reveals the plot, the devisor of the plot, and her Jewish lineage and
asks for her life and the life of her people. The rest, as they say, is history. Beautiful
history.

As supporters of Israel, we know that persecution is woven into their existence. The story of
Esther should remind us of many things:

We at Father’s House fully recognize this persecution will continue and require our ever faithful
support for the land of Israel and the people of Israel – whether they are living in the
Land or not. We believe that our ministry at Father’s House, as well as your support of our
ministry, has been brought together for “such a time as this.”

Newer Father’s House on Tour
Back to list
Older Women At The Well – Who Should Go?